Last time on Ever On & On, biochembelle sensed a disturbance in the force, the hints of a squirrelly feeling about the plan to pursue a faculty gig. Now the continuation…

It took some time for me to realize that something wasn’t quite clicking. There was a sense of unease that I gradually began to acknowledge. As I took care of other things in my life, space began to clear in my head. I started to grasp that, for quite a while, I’d been pushing down this path without stopping to reassess whether it’s what I still wanted. At last, I accepted the possibility that I might want something else – or not, but I knew that I needed to take a look.

At first, I just expressed the “doubt” to a couple of people I trusted deeply. People I was almost certain would listen. Who might reflect what they were hearing back to me. Who might ask questions, but thoughtfully. Whose responses would be measured – never aggressive nor judgmental.

There was the occasional cryptic post or tweet I suppose, a number of musings about change, which were really quite applicable to a number of things in (my) live. But I was quite selective about sharing specific things. My partner, a friend (outside academia), my therapist.

Even then, it was still nerve wracking. What if they told me I was being ridiculous? Would they look at me differently? Would they see me giving up? What if it went the other way? What if they thought I wasn’t cut out for the academic life?

I needed space to make this decision on my own, but I needed to give form to the ideas by putting them into words. So I had to entrust my thoughts with those who would be responsive without trying to really influence my choice.

As these murmurings carried forward, an obvious question rattled about. If not the faculty track, then what? I hadn’t abandoned the academic route at this point, but I needed something less abstract than “everything else” for comparison. I needed to think in terms of places I might like to move towards.

I was considerably more savvy about available options than I was when I started grad school. There were things that held some vague potential. But what did I have to offer? What would be needed or useful? What might align with my interests? What were my interests?

There were a lot of questions. I needed something to bring some semblance of order to the jumbled mess in my head.

Quite some time before all this questioning, I had heard of myIDP as a tool for helping trainees finds some career direction. But then I knew where I was going. I was busy. And I was skeptical.

The IDP is an “individual development plan”. The National Postdoc Association has been encouraging its use for several years, and a number of institutions started requiring postdocs fill them out and discuss them with their postdoc advisers annually. At its heart, the intent of the IDP is to have postdocs taking inventory of skills and accomplishments, considering career targets, setting goals to get there.

In principle, this is how it’s designed to go: 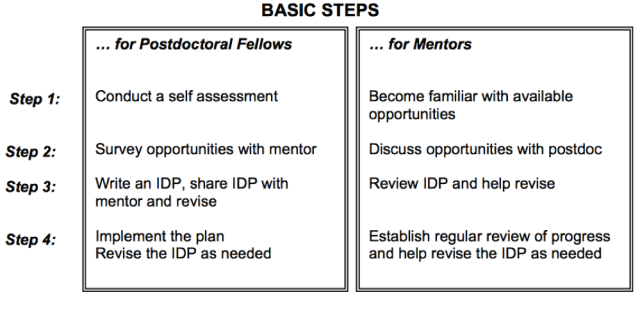 However, I think many of us feel the process is more like this: 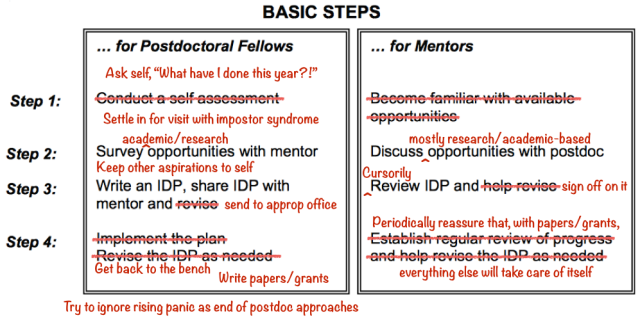 Of course, this is intentionally hyperbolic. I don’t think this reflects actual practice. Rather it’s intended as a hyperbolic synthesis of reality and emotion during a “temporary” phase of life.

And a reflection of why I wasn’t sure myIDP was particularly useful and hadn’t bothered to put the time into it.

But now I was looking for some focus. Then I saw a post from DNLee on myIDP. It sounded like maybe it was worth a shot.

So one afternoon, as some incubation carried on in the lab, I sat at my desk, committed to try it out.

Once I got through all the user info and intro stuff, it was on to the self-assessment. myIDP took me through a “guided” self-assessment. I wasn’t sitting there trying to divine strengths and weaknesses and interests out of nothingness. myIDP asked me to rate myself in several categories on a 5-point scale.

The skills assessment starts off with science or research-specific things, but it goes on to things like communication and management too – in other words, those “soft skills” that we might not usually think about. Next there’s an interest assessment that somewhat mirrors the skills one. Then on to “values” – what things do you want to get out of your work and what couldn’t you care less about, from benefits and job security to work environment to impact on society.

I tried to think about the questions and rate them realistically. Although I finished the assessments in an afternoon, it was not a 15-minute exercise. It took time. Because I was doing this for myself, I wasn’t rushing through to the finish. I used it to get to know myself, in a way.

Once I got through all the questions, myIDP offered some considerations for career fit based on the skills and interest ratings. This wasn’t a Magic Eight Ball, telling me which career I should pursue. Nor was I looking for it.

Instead, myIDP crystallized some ideas. Amorphous thoughts began to take form, and some new considerations emerged.

More importantly, it had provided a framework to focus in on what I had to offer and what I was looking for in a career – whether that was an academic track or not.