Posted on January 4, 2019 by biochembelle

The further we went, the more anxious I became. We had been hiking up for this mountain face a while, the pace slowing as the incline became steeper. We began to occasionally find trickles of water creating icy rocks, here in the shadow of the peak almost a mile and a half above sea level.

When we’d made the decision to start up the slope, our goal had been to reach the pass so we could get a view of the other side. But as we got nearer the top, the slower our progress. Fellow trail users who’d been here before would proclaim, “This is the worst of it. Not far now!” Yet another section would come, even steeper or more technical or coated in water, liquid or ice. And still the peak loomed above us.

Eventually we decided that, as the saying goes, “Discretion is the better part of valor.” We were already exhausted. Though we could see the top, we couldn’t see the end. And we still had to retrace our steps before darkness fell. So we turned back without reaching the pass. We had “failed”.

It wasn’t all for naught though. We had managed to ascend far enough to be rewarded with an amazing panoramic view of the lake and mountains below. 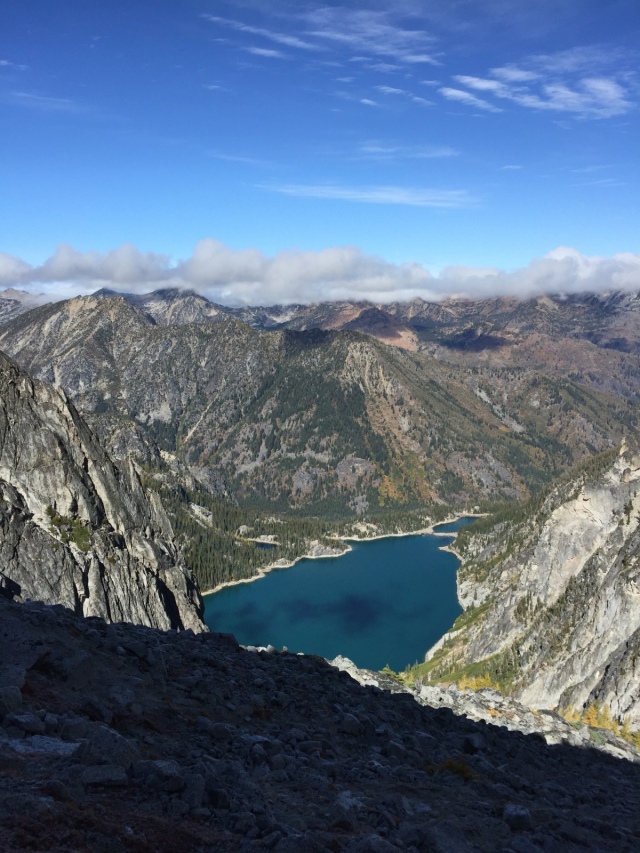 We set our sights on pinnacles. There are promises—spoken and unspoken—of renumeration, perhaps power and influence, awe. But if we’re honest with ourselves, how much of the draw is in the challenge itself? In being able to say, “I did this,” and knowing that some small number of people (relatively speaking) have been here?

In youth (and even later, maybe even our lifetime), we tend to focus on completion. It is, of course, a critical component of being… done and accomplishing something in this world.

At some point though, we will fall short of the target we set ourselves. We willingly take on, what is at least for ourselves, an audacious goal and find that we just don’t have what we need to see it through to its finish.

At least not today.

But the attempt is not fruitless. At least it doesn’t have to be. We learn something when we fail. We take away a better understanding of what we need to finish so that, maybe, we can come back and try it again. We discover what our limits are at this point and in this part of our lives. We grow strength, knowledge, and skills from the effort itself, which will serve us in what we do tomorrow or next month or even in years to come—if we choose to build on the gains of today.

If you like the photos in this week’s posts and/or are interested in topics like running, trails in the Pacific Northwest, or a couple deciding to take on an ultramarathon, check out the other blog I contribute to: Boundary Conditions.